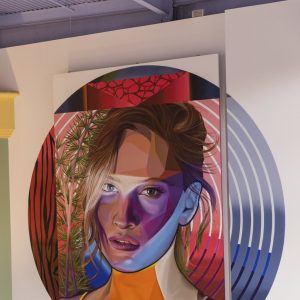 VANS THE OMEGA (1977) is an artist born in 1977 and roughly based in Adelaide Australia. Vans the Omega has been creating & painting letterforms for over two decades, which has seen him travel around the globe consistently since 2000. Most of his influences have come from ancient scripts, architecture, engineering, nature & the idea of movement or balance. Recognized for his attention to detail and search for perfection within letter structure, technique and life has put Vans the Omega in the spotlight worldwide and helped to advance the way in which the art form is painted alongside his other TMD members & extended family of writers around the planet.

Currently the mix of sharp highly technical machine-like shapes, seemingly impossible patterns mixed with a traditional graffiti aesthetic based on sound foundations are blending to produce new innovative works which continue to push the boundaries on a world scale and propel his own desires to reinvent and perfect his craft on a daily level.

Well versed in a number of disciplines from Design, Photography, Clothing & moving image keeps the ideas & endless possibilities rolling inside this artist’s head with no end in sight. Stay tuned for the next two decades of progression.