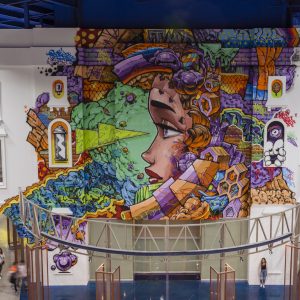 Sofles has been both reviled and embraced by the media over his ten-year career that began as a graffiti artist in Brisbane. Following years of perfecting his craft, he burst onto the scene in the late 2000's with various sold-out exhibitions, collaborations with artists such as Anthony Lister, Ben Frost and Revok and contracts with the lied of Red Bull and Adidas.

With many a finger in many a pie, Sofles' work spreads across illustration, tattoo, canvas and any maskable surface. Sofles' imagery is wide and varied, with collages of mind-bending abstraction melting into intricate form, perfect snapshots of the artist's wild imagination.

Sofles' bold use of color renders pieces so distinctive that they have firmly set his reputation as one of Australia's most-watched contemporary artists. Constantly working, be it in the studio or no walls, in Brisbane, Sofles continues exploring new techniques and mediums, keeping the ever-building snowball rolling.