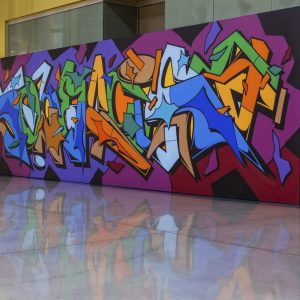 Sobekcis is a Serbian artistic duo consisting of two twin brothers primarily known for cartoon-like graffiti with explosive colors who later on started making paintings and doing graphic design. Their earlier works are a combination of figurative and abstract elements in the perfect fusion of graphics and illustration, saturated by bold and vivid colors. Since moving back to Belgrade, Serbia in the beginning of 2015, after their design studies, they’ve switched their focus to the medium of fine art, from outlined figurative forms in previous works to new pieces which are, in essence, focused more on forms color and compositions.

Sobek and Kcis -- or Ivan and Nikola Gajić -- were born in Belgrade, Serbia in 1991. Growing up in Belgrade, Sobekcis started doing graffiti art, and from the beginning it was a thing they did together. Very soon Sobekcis’ talent was spotted by the dominant crews in graffiti world, such as British Heavy Artillery crew, and they started working and exhibiting under HA umbrella. Regarding their graffiti style, Sobekcis say that cartoons were their primary inspiration, and they understand graffiti as being part of a bigger movement in which you push writing your name to the limit, trying to find a unique style of a chosen letter form.

Even though they have different styles and diverse range of capabilities, Sobekcis share the unselfish and unified approach to their art. As they say, they create in perfect sync – where one stops the other continues, or in what one lacks something the other will make it right. Their priority is to have a common goal, both nurturing and enhancing their individualities. And maybe it is the greatest balance they are managing to achieve.