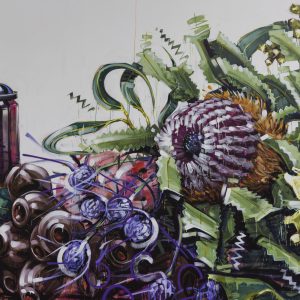 Scott Marsh (b. 1984) is an Australian fine artist who picked up his first spray can at the age of 12 and began tagging the streets of his Sydney neighborhood. In his teens, his focus turned to train carriages. He embarked on several tours of rail yards across the globe, forging a reputation as one of the most talented graffiti writers of his generation and taking the so-called Sydney-style to bold new levels. In 2009, he completed a Bachelor of Fine Arts, majoring in Painting, at the UNSW COFA (College of Fine Arts) and soon after began receiving commissions for large scale commercial murals.

As a leading figure in the rise of graffiti-based art, Marsh’s works are sought after by international collectors. His paintings are created with both brush and spray-can, exemplifying traditional techniques in oils and acrylics, combined with late-1990s street-art. His use of complex layering to create depth and texture, combined with a razor-sharp eye for has resulted in one of the most interesting and dynamic fusions in Australian fine art.

Marsh is also at once fascinated and repulsed by the cult of celebrity. Kanye Loves Kanye (2015) a gargantuan image of pop star Kanye West embracing himself, went viral, attracting the attention of international media.