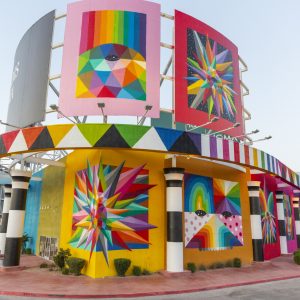 Okuda San Miguel, Óscar San Miguel Erice (Santander, born 11-1980) is a Spanish painter and sculptor known for his distinctive style of colorful geometric patterns that portray animals, skulls, religious iconography and human figures. He is perhaps most famous for painting the Kaos Temple in Llanera, Asturias, Spain. His murals can be seen on buildings and objects across the world in India, Mali, the United States, Japan, Chile, Brazil, Peru, South Africa, Mexico, Canada, Morocco, Ukraine and Spain. After receiving a Bachelor of Fine Arts from the Complutense University of Madrid in 2007, he began to produce works in his studio, which led to shows in New York, Berlin, London and Paris.

In 2015, he began producing 3D sculpture of animal heads in fiberglass bearing his signature colorful geometric patterns. The following year, Okuda painted another abandoned church with a 360-degree mural in Marrakesh, Morocco, which he titled "11 Mirages to Freedom." In 2017, Okuda was named among the most recognized contemporary urban artists by Graffiti Art Magazine.
Art critics catalog his style as pop surrealism with a clear street influence of urban art, though his style has not been exempt from controversy. His works focus on contradictions in existentialism, the meaning of life and the false freedom of capitalism, particularly on the conflict between modernity and our human roots.