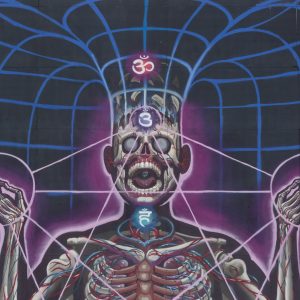 Nychos (born 1982) is an illustrator, urban artist and graffiti artist from Austria. He is known for his characteristic dissection, cross-section, x-ray and translucent styles, often portraying animals and characters drawn from pop culture. His works can be seen on walls around the world while his works on canvas and drawing have been shown internationally in galleries. In 2015 the artist released the documentary “The Deepest Depths of the Burrow”, which depicts his experiences as a globetrotter artist. Nychos' pseudonym originates from dinosaurs named “Deinonychus”. The name means “terrible claw” in Latin.

Born into a family of hunters in Bruck an der Mur, Styria, Austria, Nychos was fascinated by the anatomical details resulting from the exercise of hunting from an early age. Nychos defines his work as a fusion of graffiti, heavy metal, cartoons and anatomy. In most of his works on canvas and murals the main characters are depicted dissected, transparent or melting with their insides on display. The latest style that has surfaced is the use of translucency to create an x-ray effect in his works. Working with these new styles allowed the artist to add more details in each layer, achieving more realistic results. Nychos distinguishes himself from most graffiti artists for his spontaneous creative process. He does not rely on the support of projection to create his walls and only uses sketches during the creation of murals. Nychos is known for the speed in which he paints his large murals. His biggest mural to date, titled "Translucent Serpent," was completed in August 2016 for the Mural Harbor Street Art Project. The piece in Linz, Austria, occupies a space of nearly 900 m2 (9,700 sq ft), and was painted in five days without assistance.