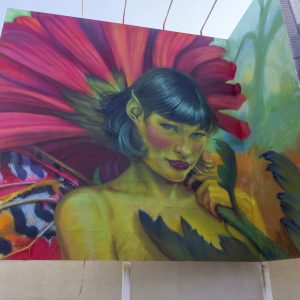 Natalie Rak, also known as Rak, is a Poland based street artist born in 1986. Rak uses brightly colored paint to do multistory murals on the sides of buildings around Poland and Internationally. Originally painting canvases, Rak switched to street art only recently. Natalia Rak is a world-renowned street artist, a graduate of Art High School in Radom. She studied Fine Art at the University of Lodz, Poland, focusing mainly in Graphic Design. Natalia Rak's subjects are typically murals of one or two individuals, mostly women. Her larger than life paintings try to invoke mystery and metaphor, often using classic stories like Adam and Eve and Romeo and Juliet. Rak started showing her work in street art exhibitions in 2009 in Lodz. A year later she participated in a show called "Different histories, join futures" in Zgorzelec. In Wielkopolska, Poland, at the SCABB festival she painted a mural that was filmed by CNN. Coming back in 2012 and in 2013 to contribute to the show. Also, in 2012 she made an appearance at the Stroke Art Fair in Berlin, Germany.

In 2013 she went to the US and participated in "Art Battles" in New York City. At 5 Bryant Street she helped convert an unused space into an exhibition of sorts of street art. There she collaborated with Don Rimx's ideas to create a mural.