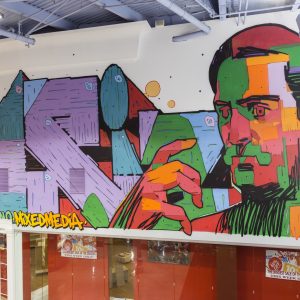 Born in 1988 in Palo Alto, California, Octavi Arrizabalaga, who goes by Aryz, grew up in Cardedeu, a small town in Catalonia about 25 miles from Barcelona. In the wake of the deindustrialisation of the region, Aryz found his first spaces for expression. Having discovered graffiti in 2000 among Barcelona’s flourishing mural art scene, from 2004 he began working in and around abandoned factories and warehouses across the region. He sees himself as a mediocre graffiti artist, but his fervour for drawing and painting hasn’t let up since his childhood. This is the reason he founded the collective Mixed Media in 2007, taking on the role of character specialist.

Before becoming the phenomenon it is today, Urbex allowed the artist the freedom to flout some of the dogmas of the graffiti world; the artist would trade in his spray cans for brushes and telescopic extensions for better coverage and a broader palette. In order to project his work beyond the rare visitors to these urban wastelands, he also began to document his work in photographs, taking into account the unique context of each work, emphasizing its spatial integration.

The circulation of these images across the Internet gave way to international notoriety, leading to his first public commission in Turin in 2010. He was soon painting in Poland, the US, Germany and France. Steadily, over the course of these commissions, Aryz branched out, combining his established style — imbued with anatomical drawings and desaturated tones — with various influences from early 20th century advertising posters to classical images from the European pictorial tradition, including still life, pastoral scenes and vanitas. The artist studied Fine arts at the University of Barcelona between 2006 and 2011, learning the ropes of the contemporary art scene. However it is at the hands of the masters of classical and Modern painting, from Goya to Morandi, that Aryz drew most of his inspiration. His murals began to take cues from the chronophotography works of Jules Marey and Eadweard Muybridge, aware of their influence on the European avant-garde, especially futurism. Interested in the sequencing of movement, their work aligned with the artist’s fascination for anatomy, going on to create a number of murals where the diffracted surface of different buildings featured a repeated motif.

A virtuoso of contemporary muralism, Aryz refuses to allow himself to be confined to the so-called “street artist” brand, he instead considers himself as “a painter who has taken the street as a medium.” His ability to outsmart trends and labels has led him to a more raw style following the publication of his monograph, Outdoors, in 2018, which highlights what he calls his “mistakes”; pencil or brush strokes, chromatic juxtapositions and other accidents that a large wall will tend to smooth over. This attention to detail and gesture also plays into his studio work. It is here that Aryz is undertaking a new challenge in oil painting. He is developing an oeuvre of contrasts, where the liveliness of the colours contradicts the primitiveness, or violence of the forms. Once again, adventuring there where he is least expected, is the way in which Aryz affirms the freedom of his creativity, following in the footsteps of graffiti writing.